Chemical contaminants and other impurities may be harmful to your health

The most important water in your home is the water that you drink and cook with. Having the highest quality drinking water will insure that aesthetic concerns (taste and odor), and health concerns (making sure that the water is free from harmful contaminants) are avoided. Reverse Osmosis water filtration treats two major drinking water problems: 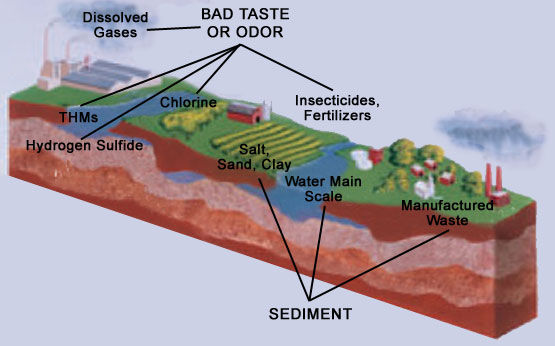 CYSTS A Cyst is a closed pocket or pouch of tissue; a cyst can be filled with air, fluid, pus, or other material. Common water-borne microbiological cysts are Cryptosporidium or Giardia cysts. CRYPTOSPORIDIUM Cryptosporidium is a parasite that enters lakes and rivers through sewage and animal waste. It causes cryptosporidiosis, a mild gastrointestinal disease. However, the disease can be severe or fatal for people with severely weakened immune systems. GIARDIA Giardia lamblia is a parasite that enters lakes and rivers through sewage and animal waste. It causes gastrointestinal illness (e.g. diarrhea, vomiting, cramps). Giardia outbreaks can occur in communities where water supplies become contaminated with raw sewage. It can be contracted by drinking water from lakes or streams where water-dwelling animals such as beavers and muskrats, or where domestic animals such as sheep, have caused contamination. TOTAL DISOLVED SOLIDS (TDS) Dissolved solids (atoms) are extremely small, usually less than 8 ten thousandths of one micron in size. Some dissolved solids (e.g. hardness minerals, alkalinity, sulfate, etc.) are harmless but may cause objectionable taste and scale problems. Others, such as lead, nitrate, sodium, fluoride, arsenic, mercury, etc., can be harmful. The amount of these contaminants allowed in drinking water is limited by government standards. Total Dissolved Solids (TDS) refers to the overall amount of all dissolved solids found in any one tap water sample. CHROMIUM VI Chromium is ubiquitous in the environment, occurring naturally in the air, water, rocks and soil. It is used in stainless steel, electroplating of chrome, dyes, leather tanning and wood preservatives. It occurs in several forms, depending on pH, the most common being chromium VI. Natural sources of water contain very low concentrations of chromium. It is a micronutrient. High doses of chromium VI have been associated with birth defects and cancer. Plants and animals do not bioaccumulate chromium; therefore, the potential impact of high chromium levels in the environment is acute toxicity to plants and animals. In animals and humans this toxicity may be expressed as skin lesions or rashes and kidney and liver damage

CHLORINE TASTE AND ODOR Chlorine is a disinfectant that many water suppliers add to drinking water to kill germs such as giardia and e coli. Especially after heavy rainstorms, your water system may add more chlorine to guarantee that these germs are killed. Chlorine can contribute some adverse effects, such as bad taste and odor. Some people who use drinking water containing chlorine well in excess of EPA’s standard could experience irritating effects to their eyes and nose or stomach discomfort. HYDROGEN SULFIDE TASTE AND ODOR Hydrogen Sulfide is a form of sulfur commonly found in drinking water. It is a common nuisance contaminants that does not usually pose a health risk at the concentrations found in domestic water supplies. Hydrogen sulfide gas produces an offensive “rotten egg” or “sulfur water” odor and taste in the water. In some cases, the odor may be noticeable only when the water is initially turned on or when hot water is run. Heat forces the gas into the air which may cause the odor to be especially offensive in a shower. The offensive odor of hydrogen sulfide gas generally makes testing unnecessary. Most people recognize the “rotten egg” or “sulfur” odor and proceed to correct the problem. Hydrogen sulfide is one of a few water contaminants that can be detected at low concentrations by the human senses. A nuisance associated with hydrogen sulfide includes its corrosiveness to metals such as iron, steel, copper and brass. It can tarnish silverware and discolor copper and brass utensils. Hydrogen sulfide also can cause yellow or black stains on kitchen and bathroom fixtures. Coffee, tea and other beverages made with water containing hydrogen sulfide may be discolored and the appearance and taste of cooked foods can be affected.

Sediments include dirt, rust, and particles of plant or animal matter that are suspended in water. Sediments are the largest water-borne impurity, although most are too small to be seen. Colloidal sediments can be 1/100 of a micron while large particles can be 200 microns or more in size. Sediment problems include cloudy, unappealing water and clogging of water passages in appliances.